My alarm clock went off at 6 AM on Friday. The last time I voluntarily got up at 6 AM was probably in high school (I never had a class earlier than 9 AM in college), or the last time I went to Nashville, a few years ago, which was by plane on Thanksgiving Day. Me and early hours are generally not friends. However, I was really excited about this trip. I loaded up my freshly-serviced and cleaned car, and headed for my parish.

The three of us attended 7 AM Mass, which included a homily by my favorite priest which also made a reference to Dante’s Inferno, so massive bonus points to the padre. Mary had enoguh bags with her that it looked like she was moving in to the convent, instead of visiting,  but we managed to get both her bags and Katie’s in the car easily (which I was worried about, because my car is small). After a blessing from Fr. G, we headed to the OSU Panera for breakfast.

Around 8:30, we hit the road south! It was a great day for driving, clear and sunny, and it got warmer with each stop, which is always desirable. Music was of course, very important to our drive, and for the way down I mostly played DJ. (I’ll post the CDs we listened to in a later post, in case you want some good road trip suggestions. :-P)

Our first stop was La Grange, KY, where we had lunch at Cracker Barrel and refueled the car.

Definitely not in Ohio anymore…. 🙂

Cracker Barrel was a good choice, since it was Lenten Friday, and they have an abundance of breakfast and seafood dishes that don’t involve meat.

The men in the South are so nice. Even the teenage boys hold the door open for you and call you ma’am. I got used to it, fast. Men of the north, get with it!

Driving through KY was my least favorite part of the trip, because: 1) I didn’t expect KY to be so “tall”; 2) There was construction; 3) the signs are AWFUL–they’ll list a sign on the left, so I would go over there, only to find I had to move over four lanes to exit. Sigh. But we did pass the “Whiskey Trail”, Abraham Lincoln’s birthplace, a Dinosaur Museum, and various other fun stops.

Finally we got to Tennessee where we gained an hour (I had forgotten that Nashville was on Central Time), and made our second stop of the trip: St. Mary’s Bookstore. I had visited her the last time I was in Nashville, and I love it. It’s got three floors! And the basement has one of the best Fontanini Nativity Displays I’d ever seen. 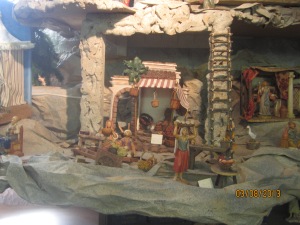 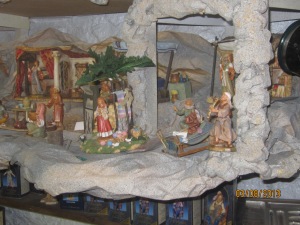 Every conceivable piece was here, in every size the line offers. I didn’t buy anything for mine, but I did get a lot of books, as I knew I would, because this is an epic bookstore: Wish You Were Here (this is one of my favorite, favorite books; so glad to have a copy!) A Man of the Beatitutdes, Summa of the Summa, Tuning In To God’s Call and a few holy cards of St. Catherine of Alexandria. If you’re ever in Nashville, you have to stop here! It’s on West End Avenue.

We still had a bit of time to kill before we had to be at St. Cecilia’s, so we stopped at a Panera for a beverage re-fuel and to tidy up a bit in the bathroom. Mary was very excited about this particular location’s drive-through option! We also saw Nashville’s Frassati House and cathedral. 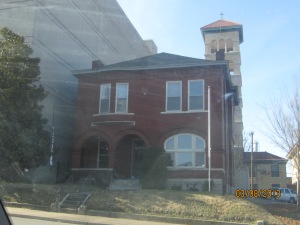 Frassati house and cathedral (back)

Now it was time to finally head for the convent! After fighting Nashville traffic for a bit, we arrived and parked in the visitor’s lot. It was a beautiful afternoon, in the 60s, and no snow. I was very excited to see grass that was greening up, and flowers! 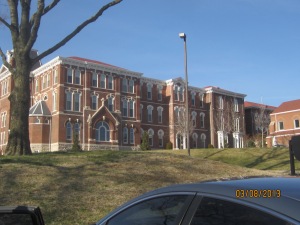 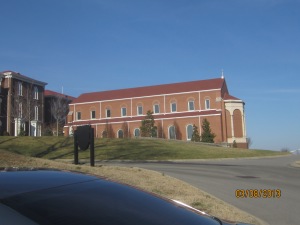 We headed up to the door, and were promptly greeted by very enthusiastic sisters (“Dominican joy” is not just something we talk about!). We got our room assignments, paid the retreat fee, and then were taken up to our rooms to unpack and prepare for the evening.

I thought the convent would have an elevator. I was wrong. My room was up 61 steep steps to the “Flats”, near the dormitory. I had a cell (fro the Latin, cella, “small room”) of my own with a gorgeous view of downton Nashville–but man, it was a hike. I think I lost about three pounds on those stairs. I unpacked my bag, got my room in order, and then headed down to the oratory for our introductory session.

This is such a powerful statement from@a Catholic nurse. I’ve been blessed with many devout nurses—Protestant and Catholic—over the years, and that has been a special blessing. Nurses and doctors, you are so important, not just in the physical care you provide, but also spiritually!
Soooo happy to have a dentist appointment!
This is pretty cool....#aveauthor @avemariapress #livingmementomori
Saturday scripture @takeupandread
Arm shaping!! #emilyknitsacardigan
#emilyknitsacardigan: I’ve started shaping the back! Yay!!!
#livingmementomori Book club in an hour! Head over to my FB writer page :)