OK, the third pillar of Lent (the other two are prayer and fasting/abstinence): Almsgiving.

I don’t know about you, but when I hear this word I think of Robin Hood in the Disney movie, disguised as a beggar in smoked glasses and croaking, “alms for the poor!” 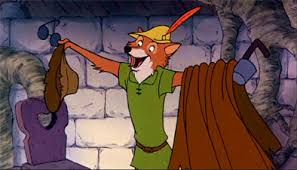 This is not, really, what I should be thinking. 🙂

Anyway: Almsgiving. Alms is defined as: charity, or something (as money or food) given freely to relieve the poor. Some churches have poor boxes in the back for this purpose (mine does). Other have special collections for the poor throughout the year.

But during Lent, we should definitely be thinking about the poor, and how to relieve their poverty. So some increase in charitable giving is to be considered. There are lots of ways to do this: donate to a food pantry, work in a soup kitchen, pick something from a charity’s gift catalog (like World vision or other such), sponsor a child who lives in a poor nation, participate in Operation Rice Bowl, or donate to your diocese’s ministries for the poor. There are so many ways you can participate in almsgiving.

To be “poor” in the United States often means things like these statistics (from 2010):

But to be poor in other countries means destitute–you’re living in hovels. You have no food or clean water. Your children are dying from malnourishment, or malaria, because of a lack of basic necessities. When we say dire poverty, this is what we mean. And yes, you can find this in pockets of America, as well. But I think during Lent it’s important to consider those who live in countries where the government cannot help them–there is no safety net. In my first post in this series, I posted a list of 10 countries with the highest population of hungry people. It’s shocking to think that in Burundi, almost sixty-eight percent of the population is hungry. Think about that for a minute. Where I am right now, I am less than 50 feet away from a cafeteria that serves salads, sandwiches, burgers, coffee, cookies, artisan ice cream, and a variety of beverages. There are three vending machines down the hall. There are at least 10 places to eat within walking distance. My office has a water cooler of fresh, clean water for anyone who wants it. According to World Vision, “more than 1,600 children under age 5 die every day from diarrhea caused by unsafe water — that’s more than AIDS and malaria combined. Clean water, basic sanitation, and hygiene education are some of the most effective ways to prevent child disease and death.”

We might not think we can make a difference with our few dollars that we can donate. But we can. A $20 (that’s a ticket to the movies and snacks, or a dinner out, or–for me–a hardback book, or a DVD/Blu-ray) donation to a clean water fund can save lives.

Like I said above, there are so many worthy places out there to give your money–this Lent, think about it. Think about the incredibly poverty that exists in our world, and do what we can to help alleviate it.